Listen to the Experts: CBD is All Alone on Claims on Tiehm’s Buckwheat Destruction Cause

Home/News/Listen to the Experts: CBD is All Alone on Claims on Tiehm’s Buckwheat Destruction Cause
Previous Next

Listen to the Experts: CBD is All Alone on Claims on Tiehm’s Buckwheat Destruction Cause

The overwhelming consensus is in, and the Center for Biological Diversity now stands alone in its unfounded claims that destruction to Tiehm’s buckwheat in September 2020 was caused by humans.

The U.S. Fish and Wildlife Service (FWS) led the investigation into the buckwheat destruction event and found herbivory activity was responsible.

The FWS has moved to propose the buckwheat’s listing as an endangered species, with a final decision due in September 2021.

Government agencies, university researchers, and environmentalists all say that the science leads them to believe that the destruction to Tiehm’s buckwheat was caused by animals eating the plant amid ongoing drought conditions.

In its report, FWS noted:

An environmental DNA analysis (i.e., trace DNA found in soil, water, food items, or other substrates with which an organism has interacted) conducted on damaged Tiehm’s buckwheat roots, nearby soils, and rodent scat strongly linked small mammal herbivory to the widespread damage and loss of the naturally occurring Tiehm’s buckwheat population. 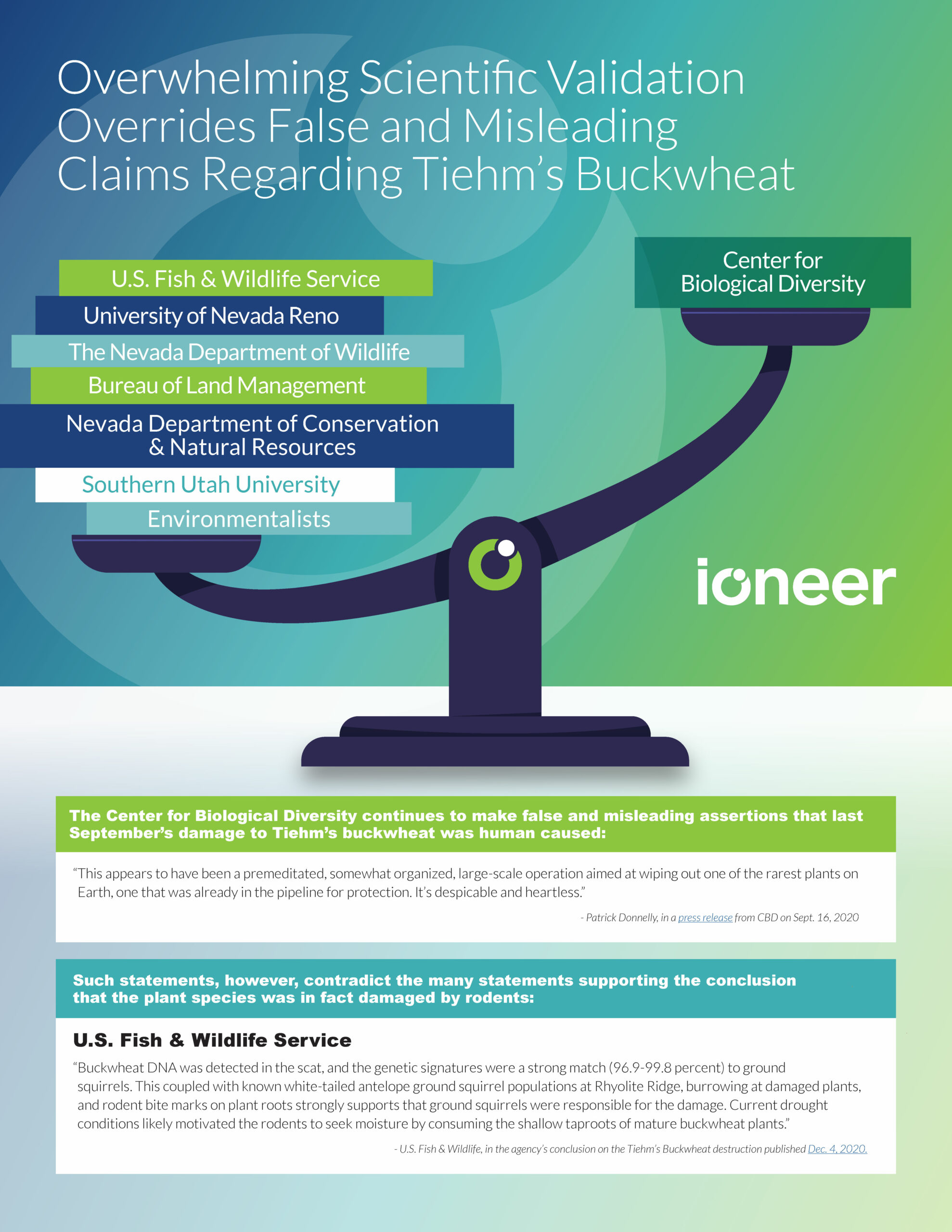 In a Utah Native Plant Society presentation in March 2021, biology professor at Southern Utah University, Dr. Jackie Grant, affirmed her belief that the damage was caused by rodents:

“Rodents are a problem. I think the evidence for rodents being part of the Tiehm’s buckwheat destruction is really strong. It’s circumstantial, but quite convincing…. Overall, there seems to be a lack of systematic collection of evidence to support this human poaching hypothesis…”

More recently, in May 2021’s Eriogonum Society newsletter, Society president and Assistant Professor of Biology, Ripon College, Dr Ben Grady, conceded herbivory was the cause of the destruction.

Additionally, a disheartening discovery was made in September 2020, when researchers and conservationists found widespread damage to thousands of Tiehm’s wild buckwheat plants. After the dust settled, it appeared that either white-tailed antelope ground squirrels or pocket gophers were responsible for the damage to about 60% of the global population of this already rare species. It is hypothesized that the mammalian culprit was drawn to the roots of the wild buckwheat after a particularly dry and stressful summer. 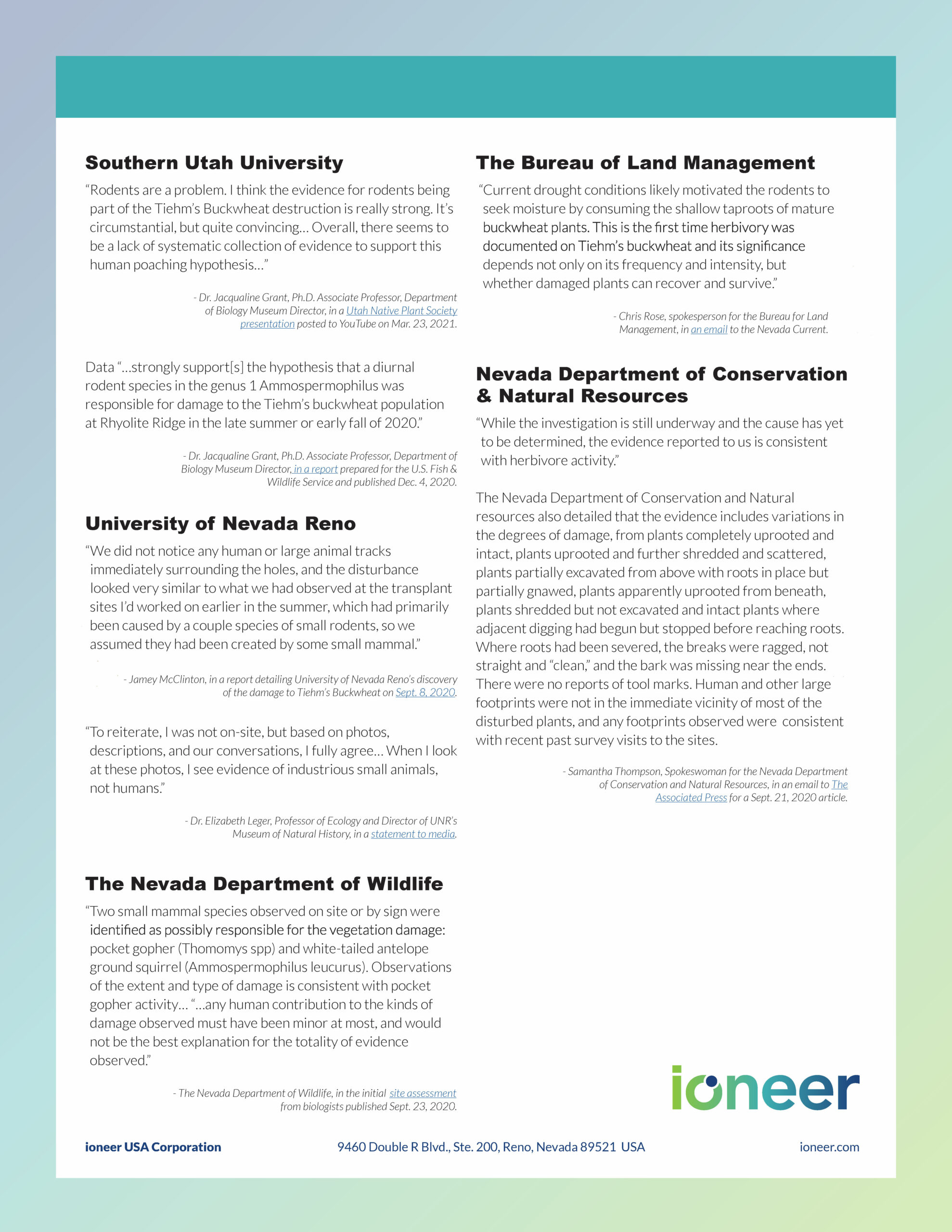 This was a significant turnaround in position for Dr Grady, who was included in the CBD’s lawsuit filings against the U.S. Bureau of Land Management (BLM) and FWS claiming doubt over the possibility of a rodent attack.

Botanists Dr. Naomi Fraga, Dr. Ben Grady, and Dr. Lucinda McDade, as well as mammologists Dr. Christopher Moore and Mr. Scott Tremor sent letters to the Service on September 28, 2020 describing their observations regarding the destruction and skepticism about the small mammal hypothesis.

Dr Grady even told the Nevada Independent that (based on the pictures) “it certainly looks like human damage.”

The increasing scientifically tested findings and conclusions show humans played no role in the destruction. The conclusions discredit the CBD and its supporters over its continued baseless, false accusations.

ioneer remains committed to following the science and working with experts to ensure the protection and propagation of this species. ioneer supports and shares FWS’s commitment to protect and preserve Tiehm’s buckwheat irrespective of its final listing status.