Rhyolite Ridge will be important for Nevada and Esmeralda County in terms of local capital investment, annual operations impact, public revenues for state and local governments, and social and charitable support

The Economic Impact Study (Study) was developed by Applied Analysis, an independent, Nevada-based consulting firm with extensive experience in preparing economic and fiscal impact analyses. Applied Analysis reviewed and analyzed the economic, fiscal and social impacts associated with the Project from construction through the proposed mine’s expected life.

The findings of the Study suggest that the Project will generate between $15 billion to $35 billion in total economic output, including a total labor income of $3 to $6 billion, based on the firm’s “median” case assumptions over the modeled 26 or 60 year mine life. 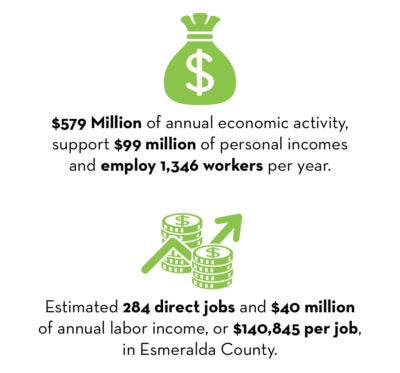 “The Rhyolite Ridge Lithium-Boron Project has the potential to have local, regional and national significance,” said Jeremy Aguero, Principal with Applied Analysis. “Here we have a Project, in a very rural part of the state, that will directly and indirectly create hundreds, if not thousands of jobs while shoring up resources that are of strategic importance to emerging industries in Nevada and nationally.”

With an expected two-year construction phase, the Project is estimated to support $132 million in economic activity in Nevada, while creating 946 person-years of employment and $60 million in wages and salaries. Applied Analysis calculates that for every dollar spent in the local economy on the development of Rhyolite Ridge, a total of approximately $2 in economic activity benefits the community as a whole.

The Project’s operational impacts are estimated to generate $579 million of annual economic activity, support $99 million of personal incomes and employ 1,346 workers per year. Specific to Esmeralda County, the Project will create an estimated 284 direct jobs and $40 million of annual labor income, or $140,845 per job.

Tax and fee revenues for the state of Nevada and local governments are estimated to be in the range of $0.6 billion to $1.3 billion over the Project’s life. In the first year of operations, the mine is estimated to generate between $13 million and $32 million of public revenues. 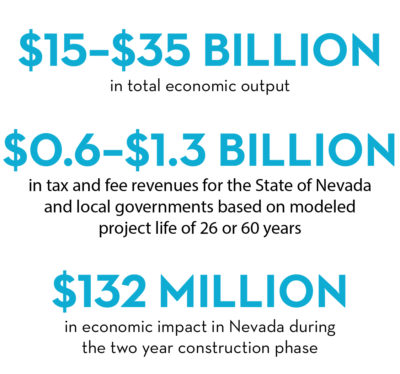 The investments by ioneer go well beyond the economic and fiscal impacts reported in the Study. The Company plans to be an active participant in the community with targeted contributions to important local causes. The project activity is expected to result in charitable investments ranging from $100,000 to $250,000 annually.

“We recently delivered our Definitive Feasibility Study which confirmed our long-standing belief that Rhyolite Ridge is a world-class resource with the potential to become a truly transformational project for the global lithium market. What the Economic Impact Study shows is that this Project will also be incredibly important economically for Esmeralda County and the state of Nevada.

“When the Study was drafted, Nevada had a 4% unemployment rate. Today, it’s a much different picture. We are heartened to know that this Project will have a tremendous positive economic impact. In the near term, it is expected to create as many as 500 construction jobs and 300 high-paying operating jobs that are needed now more than ever.

“Lithium and boron are both used in a diverse range of everyday items and innovative technologies that are essential to modern life and emerging clean technologies such as electric vehicles and renewable energy. Lithium is classified as a ‘critical mineral’ by the United States Department of Defense and right now two-thirds of Lithium materials ultimately come from China. With the Rhyolite Ridge Project, ioneer will provide critical economic development opportunities and develop a large-scale, environmentally and socially sensitive US-based source of lithium and boron that is geographically well-positioned to supply major US and Asian end markets.”

About Rhyolite Ridge and ioneer

Ioneer USA Corporation is the 100% owner of the Rhyolite Ridge Lithium-Boron Project located in Nevada, the only known lithium-boron deposit in North America and one of only two known such deposits in the world. Rhyolite Ridge is expected to become a globally significant, long-life, cost-effective source of lithium and boron vital to a sustainable future.

Rhyolite Ridge’s unique mineralogy allows lithium and boron to be extracted in a low- cost and environmentally sustainable manner. The Project’s commercial viability is made possible by having both lithium and boron revenue streams.

Lithium is vital to enable technologies that combat climate change and reduce carbon emissions. It is a critical component for batteries essential to electric vehicles, and the conversion of intermittent green energy to base load power. The U.S. Department of Interior listed lithium as a critical mineral in Executive Order 13817 (Federal Register, 83 FR 7065). There is only one producing lithium mine in the U.S. and no new projects are under construction. Rhyolite Ridge will help address the over-reliance on South American and Chinese supply to the lithium-ion battery industry.

Boric Acid is also a very important material for clean technologies and sustainability and is only produced in a few locations globally. It is used in over 130 applications, including permanent magnets for electric cars and wind turbines, advanced glass for televisions, computers, handheld devices and solar panels. Over 70% of global boron reserves are located in Turkey with Rhyolite Ridge well positioned to geographically rebalance supply in the U.S.