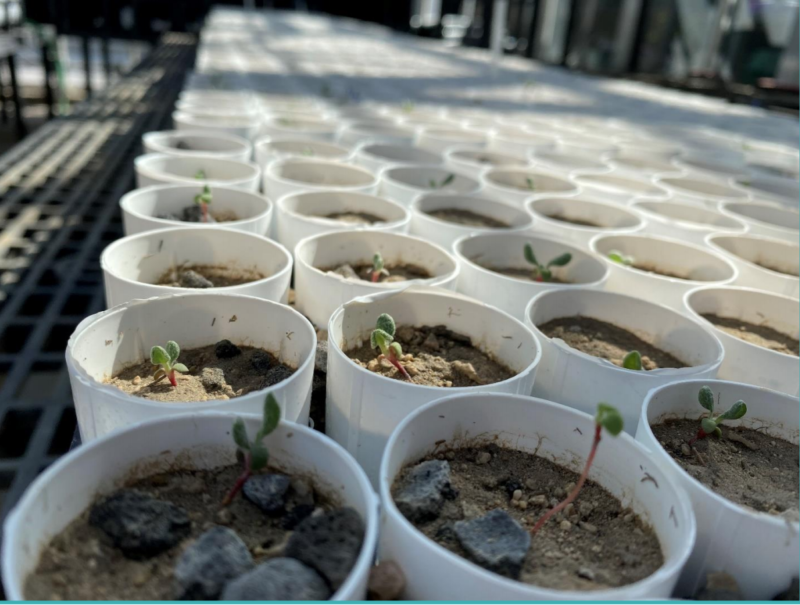 In the summer of 2019, ioneer announced a year-long $60,000 grant to the University of Nevada, Reno (UNR) for the study of Tiehm’s buckwheat (Eriogonum tiehmii), a tiny plant endemic to Nevada. This study was a new phase of a larger botanical mitigation and preservation plan to protect this species.

Tiehm’s buckwheat, which was first identified and described in the area in 1985, grows at ioneer’s proposed Rhyolite Ridge Lithium-Boron Project, in Esmeralda County. ioneer has taken significant protective measures to avoid impacting this species and others.

Since ioneer took over exploration in 2016, there is no evidence that activities at the site have had a negative impact on the Tiehm’s buckwheat population. The company is committed to enabling the population at Rhyolite Ridge to thrive. The research being conducted at UNR is part of this larger plan.

There are two main facets to the UNR study. The first is to grow seeds to be transplanted into unoccupied suitable habitat to expand the population. The second is to determine how the plant grows in different soils.

A UNR research team lead by Elizabeth Leger visited the Rhyolite Ridge site in late 2019. Working closely with Kris Kuyper of EM Strategies and Comstock Seed, seeds were collected from 300 plants, representing approximately two percent of the total number of plants in the population. Soil was also collected in January 2020 to use in germination tests. Researchers at the university planted 3,600 seeds at the Valley Road Greenhouse Complex.

Researchers are now seeing a much greater germination success rate than the predicted 16%, with 29% emerging as of April 1. In May of 2020, the team will outplant some of these seedlings at Rhyolite Ridge, as well as continue greenhouse studies exploring the effects of differing soils.